In these days of pop AAA artists trying to pass themselves off as folk artists, it is refreshing to read thoughts of social consciousness from a contemporary musician.  Although there are many, they are graying and diminishing as time goes on.
Enter Matt Brown, an old-time musician, producer and teacher residing in Pennsylvania.  If all goes as planned, Matt will be touring through the Northeast next November. 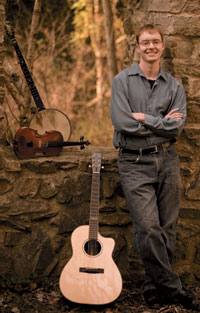 My Letter To Obama

by Matt Brown on Saturday, December 25, 2010 at 11:53pm
Mr. President,
My frustration with your Peace Prize Acceptance earlier this year is that you, of all people, are trying to outsource, or even worse, postpone, Peace. I understood your acceptance speech, and it Terrified me:
"We must begin by acknowledging the hard truth: We will not eradicate violent conflict in our lifetimes. There will be times when nations -- acting individually or in concert -- will find the use of force not only necessary but morally justified."
REALLY?  "MORALLY JUSTIFIED"??????
Are you a priest, too, Mr. President?
The ONLY WAY TO GUARANTEE PEACE IN THE FUTURE IS TO START WITH THE PRESENT.   Say that out loud. The only way to guarantee peace then is to start now: in your heart, in your White home (the irony is not lost), and in your dealings with everyone you meet. Here's an exercise: Imagine that every word, every gesture that everyone makes is their way of saying "I love you," to you, to Michelle and the girls, and to all your citizens.  You will start seeing red everywhere. And red is the most potent, vivid color.  The color of Native Americans, of Blood, of LOVE.  Of course, we are, as a nation, so terrified that someone will try to kill anyone with a good idea (Jesus, MLK Jr. Ghandi, John Lennon, etc), that we surround our leading diplomat with Tall Mysterious Secret Agent Wire-Eared Types who are supposed to protect him from the next loony.  But I digress.
I am finding, as I meditate, practice yoga, and extend my gratitude, love, and hope beyond the reaches of my corporeal form, that love is revealing itself to be pulsing vibrantly here, there, and everywhere.  Maybe it's your law training, or your current position as a diplomat, but I do not agree with your defeatist (?!?) perspective.  We WILL eradicate conflict in MY lifetime. I am doing the best I can in my life. I am not at war with anyone. I am daily doing Every Thing with Increasing Love.
If We accept you at your word and Also believe that we won't see peace in our life times, than our Passivity will Prove you right.  ICK!!!!  And though I voted for, even campaigned for you because you talked a really good talk, I am going to Prove you Wrong.
We can send jobs to China, we can send our children to Afghanistan, but we cannot send peace anywhere. We can only, should only, Be At Peace.  And that's the end of the story.  Being full of peace, being peace-ful, is to love every human as much as we love ourselves, and to let that love nourish ourselves AND each other. A smile begets a hug, a hug births a promise, and that promise opens the door to marriage, hope, and a whole new world.  Can you see it????? Because I can. I am breathing that future into my present this very moment.
As a twenty six year old desiring to start a family, I am leery to bring a new child into a world where we are stil! killing each other left and right; a world where we send our young folks off to kill, then when they come home traumatized, we mostly ignore them.  We don't even Guarantee our Veterans the dignity of Food, Water, and Shelter, let alone the emotional and spiritual help that is necessary for forcing them to play Kevorkian on the citizens, young and old, of other nations.  We have multitudes of veterans from previous wars shivering out in the cold, seeking solace wherever they can find it, but they can never escape the trauma that they LIVED, so that "We, The People" wouldn't have to.  Well, We are living it out.  The fact that there is a Single homeless person in The Land of Opportunity is a complete embarrassment.  And many, All too many of the homeless are the surviving cannon fodder from some Monarch's war game, whether it be your current battles or those of Bush, Clinton, the burning Bush, Reagan, Carter, Nixon, Kennedy, Roosevelt.............you can name the others, can't you?  Well, if not, it really doesn't matter so much.  What does matter, is this:
WE, the PEOPLE, Can Say "enough."
We, the PEOPLE, Can Embrace the Truth that Each One of Us is Peaceful. If We Are All Peaceful, there will be no war.  It is that simple.
BUT IF you, THE PRESIDENT, chose to Lead it, well, gosh, we could get there with startling velocity.  It would be the Lack of A Shot that Was Heard Around the World.  And it would happen before your girls get to college.  Imagine that.  What if your two little girls could go to college wherever in the world they desired, rather than feeling like they were nothing but potential victims for some horrid extortion plan?
I am praying for Peace on Earth.
I am praying for Good Will Toward huMan(andWoMan)Kind.
I am PRAYING for A true Silent Night.  Like the one immortalized by Sam Broussard: http://itunes.apple.com/ie/artist/sam-broussard/id4264699
I see no reason to kill my brothers and sisters.  I see no reason to send my future babies to war, when they are eighteen, nineteen, or twenty.  Are you really comfortable with the thought of putting Your children in harm's way?
Would you let Sasha and Maliah join the military???????????????
If I were their father, there WOULD BE NO QUESTION.
The Answer, MR. President, IS, WOULD BE, AND ALWAYS WAS:
NO.
Matt Brown
matt@brownsdream.us
http://www.brownsdream.us/
http://www.twitter.com/oldtimetwiddler
http://www.youtube.com/MattBrownsDream