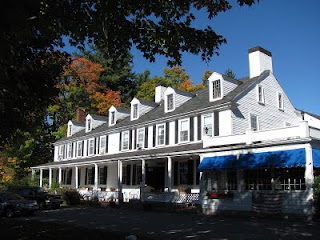 The Groton Inn was home to the "Groton (bluegrass) pickin' party" hosted by Paul Murray and "Fiddle Hell" produced by Dave and Andy Reiner.
From Paul:

Sadly to announce, the historic Groton Inn was destroyed last night as the result of a four alarm fire.
It has been a pleasure to work with the inn's ownership, staff , and all the good people who made up 4th Saturday  picking party at Groton.
This event was about 15 to 20 years in the running and a place were a lot of good friends were made, great music was played, and many pickers,new to the jamming scene were, welcomed, encouraged, and made to feel at home.
We will scout the area to see what may be available to continue satisfying our bluegrass appetites.

Fiddle Hell's future is unclear, I am seeking information from Dave.

GROTON -- Firefighters from across the region were battling a four-alarm fire last night that devastated the historic Old Groton Inn, a structure believed to be nearly a century older than the very country in which it stands.

Firefighters were called to the inn, also known as the Stagecoach Inn, at 9:40 p.m. By a little after 10 p.m. the entire second and third floors of the sprawling building were engulfed in flames.

"I feel like I'm watching history go up in flames," said Joni Parker-Roach, who has lived nearby since 1992 and owns the NOA Gallery just down the street.

The building at 128 Main St. is believed to have been built in 1678, according to a history on the inn's website. That is 98 years before the United States declared independence from England on July 4, 1776.

Parker-Roach said she first noticed something was wrong when she heard sirens outside her home and noticed they stopped nearby. She looked outside and saw black smoke coming from an upper window of the inn. More black smoke emerged, and then flames burst from the roof, Parker-Roach said.

At 10 p.m., Groton Fire Department radio broadcasts indicated a man who was unable to walk was inside the first floor of the building, but minutes later firefighters reported he had been evacuated and was unharmed.

Police Chief Donald Palma believed no injuries had been reported.  "To my knowledge, everyone is out and everyone is OK," Palma said.  Palma said officials were still trying to determine how many guests and residents would need to be provided for overnight. No one could say how many were inside when the fire started.

Fire Chief Joseph Bosselait and his deputies stood on Main Street directing efforts to stop the flames and could not immediately comment. Four people who gathered behind the building, including a man with crutches, declined to comment.

By 11 p.m., gables atop the front of the building had collapsed at angles into the second floor as the entire building was consumed by flames despite being surrounded by four ladder trucks and dozens of firefighters from as far away as Tyngsboro and Hollis, N.H.

Crews were expected to remain at the scene overnight, and mobile command centers from State Fire Marshall Stephen Coan's Office arrived at the scene late in the night. Even at 11 p.m., a steady stream of fire apparatus sped toward the fire on Route 119.

"It's such a central point to Groton," said Heather Hayes-Beaulac, 46, of Leominster, who grew up just down the street. "It's unfortunate."

James Desrosiers, of Groton, watched the flames with his wife, Claudia, and used a smart phone to look up the history of the inn as it burned. He said presidents had stayed in the inn. A woman nearby said she believes the inn was the oldest continuously operating inn in the country.

"This place has a lot of history, not only for Groton, but for the entire country," said Desrosiers. "It's a piece of history we're losing tonight."  "It's just so sad," added Claudia Desrosiers.

For years the inn had fallen on hard times. It was purchased by George Pergantis in 1977, and renovated in 1990, according to a history on the inn's website.
Pergantis was rumored to be considering a sale of the building until that deal fell through late last year.

Parker-Roach said she has long hoped the Inn could help bring even more life to Groton Center.

A tavern at the inn can accommodate about 100 guests, and there are 16 rooms available for lodging, according to the inn's website. It was not immediately clear last night if the tavern was open when the fire began.

The tavern occasionally hosted live music in recent years, which Parker-Roach said brought a welcome source of entertainment in the rustic town center.

Dozens of onlookers gathered across Main Street from the fire and even in bushes across the driveway until firefighters and police pushed them back. Some of those watching had tears in their eyes.

"They're not going to be able to replace this," said a teary-eyed Parker-Roach. "It's awful. It's just awful."