A pair of blues greats giving concerts on their own birthdays, how cool is that!

a pair of
blues greats giving concerts on their own birthdays!

“One of the best guitarists in the world.”
—Dave Van Ronk
“Hull is something of a guitar god in his native midwest, where he’s been
dazzling audiences for over 30 years with his lush ﬁnger-picking and quicksilver
ﬂat-picking. He is also a sly raconteur with an encyclopedic knowledge of vintage
American music.”
—Scott Alarik, Boston Globe, March 2004
“There’s a million good things I could say about Dave Hull but I’ll narrow it down
to two: He’s an excellent picker, both ﬂatpick and ﬁngerstyle, he collects some
ﬁne instruments, and we’ve been at a lot of good places to eat together.”
—Norman Blake
“Hey Dave, thanks for sending me your Loyalty Waltz album. I just put it on to
use as background music for something I was reading. Damn you, I never read a
thing. Listened to the whole album straight through. Nice album, my good man.
Keep on.”
—Geoff Muldaur

Hailed by everyone from Dave Van Ronk to Doc Watson, from the Washington Post to downbeat, Dakota Dave Hull’s guitar style spans a wide musical geography to create an infectious, uniquely personal blend of jazz, ragtime, folk, blues, Western swing, and vintage pop. Dakota Dave is a restlessly curious, adventurous traveler along the broad highway of America’s music. In his playing the masters speak, but in a vocabulary that is Dave’s alone: alternatively mirthful and moving, always melodic.

A gifted composer as well as a strikingly original interpreter of older tunes, Dave calls what he does “classic American guitar.” Folk legend Van Ronk called Dave “one of the best guitarists in the world.”
Most of all, Dakota Dave’s music is great fun. As Douglas Green (Ranger Doug of Riders in the Sky) puts it, “There is an imp within Dave Hull that always expresses itself on the fretboard; a witty, intelligent yet respectful imp who frolics in his music, an imp Dakota Dave neither fights nor lets take control, but simply absorbs into the heart of his style.”
On stage or in the recording studio Dave has performed with Utah Phillips, Doc Watson, Robin and Linda Williams, Dave Van Ronk, John Renbourn, Paul Geremia, Spider John Koerner, Cam Waters, Sally Rogers, Butch Thompson, Peter Ostroushko, Garrison Keillor, and Norman Blake, and many others. His albums include three with early performing partner Sean Blackburn and six solo efforts (the acclaimed Hull’s Victory and Reunion Rag, both on Flying Fish) with four more, New Shirt, Sheridan Square Rag, The Loyalty Waltz and Time Machine on Arabica Records. Airship, a duo album with singer/guitarist/fiddler Pop Wagner was widely praised. His three albums with guitar and mandolin ace Kari Larson (also on Arabica) have become legendary. Most recently, Dave recorded an album of mostly traditional music duets with the noted guitarist Duck Baker, When You Ask a Girl to Leave Her Happy Home.
Dave is a recipient of a 2013 Traditional Arts grant from the Minnesota State Arts board.
*WORKSHOP: "The Art of Making Arrangements" $30 (less 20% JPTC members). RESERVATIONS AND PRE-PAYMENT REQUIRED. Arrive 6:30, workshop 6:45-7:45pm.

"This special workshop from acclaimed guitarist Dakota Dave Hull offers something for all levels of player, either fingerstylist or flatpicker, or both. Some of the things that'll be discussed: Melody, Harmonization, Transposition to other keys and registers, Improvisation, Solo, Playing nicely with others, Backup, Right-hand Technique, Rhythm, and Bringing it all together. We'll also talk some about right-hand technique, that singularly overlooked and incredibly important part of guitar playing, whether with a pick or fingers. Dave will happily try to answer most any questions a participant may have about arranging for the guitar or a group."

CONCERT: Doors 7:30, concert 8-10pm. $20 at the door, $15 in advance. 20% discount for JPTC members + $1 preservation fee.
COMBINED WORKSHOP AND CONCERT: $10 discount for combined concert + workshop.
email notlobreservations at gmail dot com
In your reservation request please specify you are reserving for the workshop, the concert, or both.
Coffee from JP Licks
Pastries from Fiores Bakery 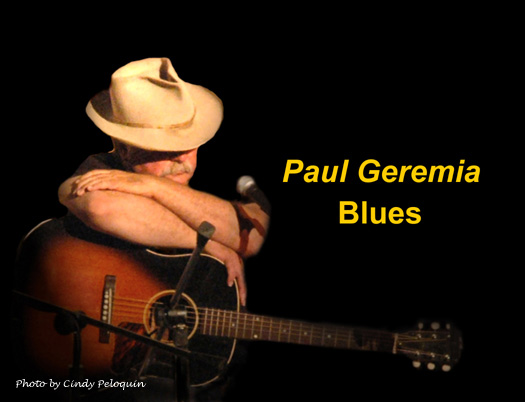 notloB Folk Concerts' 100th concert was supposed to be on the 6th year anniversary (June 2, see below) but when a living legend calls AND it's his birthday, how can one say "no?"
For almost forty years, Paul Geremia has survived solely by the fruit of his musical labours. Having abandoned all other means of support in 1966, he has been travelling far and wide ever since, performing in every capacity from street singing to club and concert bookings, throughout the U.S.A., Canada and Europe.

In the years since, Geremia has built a reputation as a first rate bluesman, songwriter, a "scholar" of early jazz and blues, and one of the best country blues fingerpickers ever with his tools - six and twelve-string guitars, harmonica, piano and a husky soulful voice - and with an innate sense of the humour as well as the drama of the music, he keeps traditional blues fresh and alive with his performances.

Combining his interpretation of the earlier music of people like Blind Lemon Jefferson, Robert Johnson, Blind Willie McTell, Scrapper Blackwell and Blind Blake, with his original compositions, he has created a style which is very much his own and which has received accolades in the U.S.A. and Europe, too numerous to mention.

Geremia's background isn't typical for a bluesman. He is a third generation Italian-American who, as he laughingly puts it, "was born in the Providence River Delta". Growing up in a family that moved across the country and back numerous times weaned his appetite for music, history and travel, which served him well later on.

During the sixties, Paul noticed that the music he had enjoyed playing on harmonica (his first instrument) was now referred to as "Folk Music" and was enjoying popularity. During his short time in agriculture college, he was mostly occupied with learning guitar and hitch-hiking to where the music was. He soon left college and hit the road permanently. He found paying gigs in coffee houses and "basket houses" in cities and at college campuses and made occasional forays South and West in search of the music he loved and what gigs he could find.

During these years, Geremia crossed paths with people whose influences were beneficial to his development and understanding of the tradition. He worked as opening act for some of the early blues "legends" thereby gaining an immeasurable depth of knowledge from people like Babe Stovall, Yank Rachel, Son House, Skip James, Howlin' Wolf, and many others, especially Pink Anderson whose career he helped revitalize.

Geremia has recorded ten solo albums, and has appeared on numerous anthologies and compilation discs. His superb recordings have made him a critical favorite and place him firmly among the legends who inspired and influenced him over the past four decades.

We tried, but the acoustic blues guitar playing community did not respond. Due to insufficient registration the workshop has been cancelled. Maybe next time.
But the concert is still on!
https://www.facebook.com/events/316960838404698/