Why Jim Hurst couldn't care less about the CMAs, and why Mark Simos believes it's again safe to watch


"There is a LOT of music I wouldn't exactly call country being played on 'today's country' radio. Just because it has a tractor or a case of beer in it don't make it country, that makes it cheese factor 12 to me."
-Jim Hurst, Jim Hurst, 2x IBMA guitar player of the year, a 2x notloB Parlour Concerts (5/15/10 & 5/23/12) alumnus and a hell of a great guy. 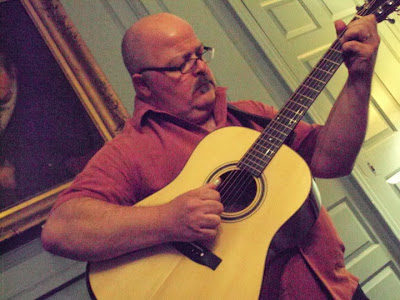 "Sorry if this surprises anyone, but I couldn't care less about the CMAs. Haven't enjoyed the bulk of what is called "today's Country Music" for quite a while... years.

I get it that it sells, and why that is SO important in business, I just don't understand why musical art can't also be included in that 'genre' - using the term loosely.

When country stopped playing the music of Vince Gill, Ricky Skaggs, Patty Loveless, and many many more - not even mentioning the legends - I quit listening, and buying.

Even more surprising to some of you: I actually appreciate Taylor Swift and her talent... heck, I even like her music. Yes, you read that right. Do I consider it country? Not me.

There is a LOT of music I wouldn't exactly call country being played on 'today's country' radio. Just because it has a tractor or a case of beer in it don't make it country, that makes it cheese factor 12 to me.

Besides the CMA's and the ACM's have almost always been much ado about nothing, even in the grand days of country music.

But, I choose to ignore the hype and the non-country music of the CMA's and ACM's and watch a good movie, HGTV, read a book, or take a walk.
But that's just me."

The following morning another notloBBer (2/17/12), Berklee College of Music Professor Mark Simos, songwriter, and multi-instrumentalist and another swell guy, did watch the CMA's, posting the following to his Facebook page: I tuned in to the CMAs Wednesday night because I heard Taylor Swift would be performing with Alison Krauss and other amazing folks (a true pantheon) from the more traditional side of country and bluegrass. It was indeed a beautiful moment that filled me with pride and admiration, both for the musicians I know and for Taylor's taste and groundedness. She's a great writer and performer, and the "unplugged" version of "Red" demonstrated the true song craft that the larger production builds on.

But the real high point of the evening for me was Kacey Musgraves singing "Follow Your Arrow." Call this an open letter of unabashed gushing admiration from a doddering old New England songwriting professor, but that was just the most courageous, most heartfelt, uplifting performance I've seen and heard in a long time.

So I'm officially announcing a mad musical crush on Kacey Musgraves. I love that she brings such a deft songwriter's turn of phrase to her theme. Students of classical rhetoric should study how that song lyric is put together. (G. K. Chesterton himself would be proud, Ron Block!) I love that she frames controversy in a broader philosophical context that shifts the discussion in a powerful way. I love the grace and bravery and wit she showed (as she strummed her ukelele-esque little guitar, Cathy Fink and Marcy Marxer!). I love that she brought her grandma as her date to the CMA. I love that she whistled. I love that someone sings "Hey" in the band after "make lots of noise" and then doesn't sing again for the rest of the chorus but you're sure they're still singing hey after each line. (What's up with that about, Pat Pattison?) I don't love that they censored her line (though it kind of proves her point) but I love that she sang it anyway, and shrugged in amused acceptance because I guess she knew it was getting censored - meanwhile I'm like: "darn, such a good song but why is there that unartful lyrical lacuna right at the crux of the chorus?" I loved that she's proving Nashville might be ready for things everyone has been so sure Nashville isn't ready for. Ready or not.

But above all else: I could swear I heard her sing: "Follow your arrow wherever it pointeth." And if she sang "pointeth" in a country song, I think she should get the Nobel Prize for Country Songwriting. 'Nuff said.

With Kacey Musgraves being recognized, and George Strait winning "CMA Entertainer of Year", perhaps the country music industry has turned a corner and Jim can watch this year's awards on replay and live next year.