Brittany Haas and Nic Gareiss, a benefit for the Old Schwamb Mill

notloB veterans many times over, it will present Brittany and Nic not once, but TWICE!
On Saturday, January 17 notloB will end its 6-year hiatus from the Park Avenue Congregational Church, returning to the acoustically-alive wooden hall, where in 2008 it presented several concerts, including The Folk Arts Quartet, The Boston Boys, Joy Kills Sorrow and Blue Moose and the Unbuttoned Zippers.The concert will be a benefit for the Old Schwamb Mill.

Then on Sunday, January 18 Brittany and Nic will be presented a second time, at Carriage House of Violins' beautiful and intimate (just 50 seats) performance space. 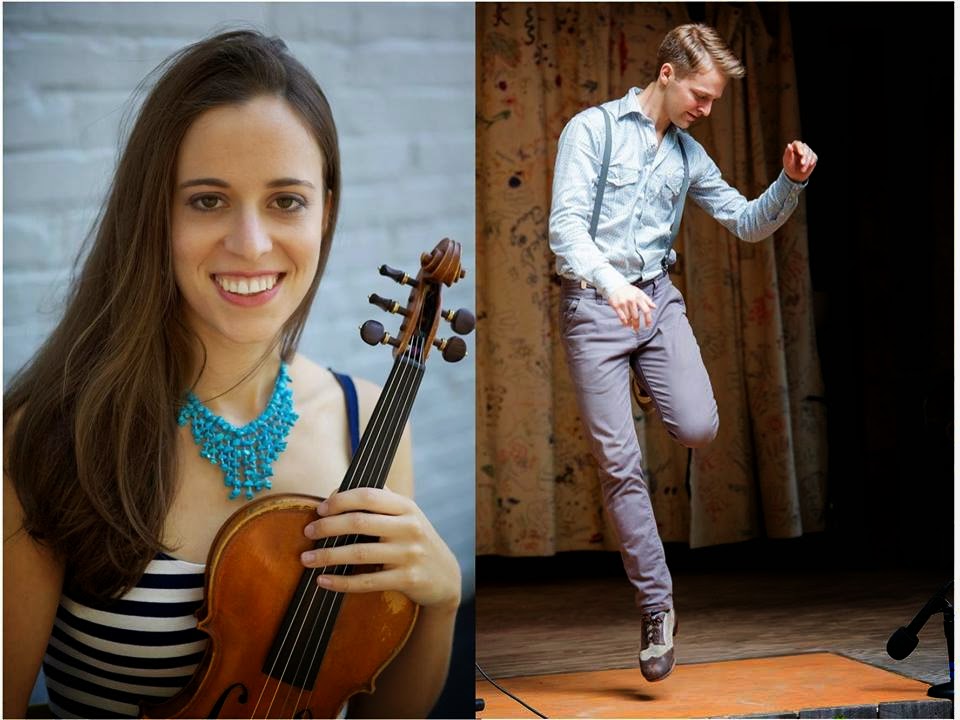 BRITTANY HAAShttp://brittanyhaas.com/California-born Brittany Haas is widely regarded as one of the most influential fiddlers of her generation. She grew up honing her craft in fiddle camps nationwide, and came to her unique sound through the old-time fiddling of Bruce Molsky and the innovative stylings of Darol Anger. A prodigious youth, she began touring with Darol's Republic of Strings at the age of 14. She simultaneously studied baboons in the evolutionary biology department of Princeton University (and minoring in music performance, composing with professor Dan Trueman) and joined seminal chamber-grass band Crooked Still. She has toured with them since, and also performed with Yonder Mountain String Band, Tony Trischka, Alasdair Fraser & Natalie Haas (her cellist sister), Abigail Washburn, and The Waybacks. She played her fiddle on Steve Martin's Grammy Award-winning CD, "The Crow," and performed in his band on Letterman and SNL. She released her debut self-titled solo album at 17, produced by Darol Anger and featuring Bruce Molsky, Mike Marshall, Alison Brown and others. Currently residing in Nashville, she is the co-leader of the Brittany Haas/Dan Trueman band who released their debut record "CrissCross" in 2011. She also plays in a fiddle duo with Lauren Rioux, an all-girl indie old-time band called The Fundies, "4tet" with Cleek Schrey (hardanger fiddle/pump organ), Jordan Tice (guitar) and Nic Gareiss (percussive dance), a trio with Jordan Tice and Paul Kowert (bassist in the Punch Brothers), and a duo with Kai Welch."So here is a real roots musician in the most modern sense--Brittany Haas fiddles from a very deep and personal place, the way she feels it, the way she wants to hear it, with seemingly infinite facility, and a spirit that's simply uplifting." -- Bruce Molsky"...a major fiddling talent has emerged." -- Mark O'Connor"She can shove the whole room around with her fiddle." -- Danny Barnes"A joy to listen to...” -- Alasdair Fraser"There's no one I'd rather listen to play the violin than Brittany Haas – her playing just slays me." -- Matt Glaser"Britt opens the window, gets out of the way, and the music floods through in a tide of joy." -- Darol AngerNIC GAREISShttp://www.nicgareiss.com/Michigan-born dancer, musician, and dance researcher Nic Gareiss has been described by the Irish Times as “the human epitome of the unbearable lightness of being,” and "the most inventive and expressive step dancer on the scene” by the Boston Herald. His choreographic work re-imagines movement as a musical activity, recasting dance as medium that appeals to both eyes and ears. Gareiss draws from many percussive dance traditions to weave together a dance technique facilitating his love of improvisation, traditional footwork vocabulary, and musical collaboration. He has performed with many of the luminaries of contemporary traditional music and dance, including The Chieftains, The Gloaming, Darol Anger, Dervish, Buille, Liz Carroll, Genticorum, Bill Frisell, Yvon Mimeault, poet Aonghas MacNeacail, Step Afrika!, Footworks Percussive Dance Ensemble, Rhythm in Shoes, Bruce Molsky, Alasdair Fraser, and Martin Hayes. In 2011 Gareiss was commissioned by the Cork Opera House to create and perform two new solo percussive dance pieces to celebrate the 75th birthday of composer Steve Reich. In 2013, he served as community liaison for the Wheatland Music Organization's 40th Anniversary production 'Carry it on...', supervising a cast of 70 non-professional dancers from the state of Michigan. He received a Traditional Arts Commission from the Irish Arts Council to create a new duo fiddle and dance work with Caoimhín Ó Raghalliah. The resulting piece, MICE WILL PLAY had a sell-out run at the Project Arts Centre during the 2013 Dublin Fringe Festival. Gareiss has concertized in Belgium, France, Germany, Switzerland, Italy, Denmark, Sweden, Ireland, Scotland, England, Canada, and New Zealand and continues to tour and teach internationally, working with dance communities and presenting solo percussive dance choreography. Nic holds degrees in anthropology and music from Central Michigan University and recently completed his MA in ethnochoreology at the University of Limerick.

Do you like Szechuan and/or Thai food? We have great news for you! Show your eventbrite ticket receipt for the 1/17 Park Ave Congregational Church concert to your server at Szechuan's Dumpling Chinese Restaurant, 1360 Mass Ave or Thai-E-Sarn Cuisine, 1377 Mass Ave in Arlington and get 10% off your dinner tab!

notloB Music Presents... Brittany Haas and Nic GareissCarriage House Violins - of Johnson String Instrument 1039 Chestnut StreetNewton Upper Falls, MASunday, January 18, 2015Doors 1:30pmConcert 2:00pm
TICKETS$20 First two rows (14 seats)$15 regular $10 seniors and students (due to the small total size, we are limiting this to 15, first come first served)
and, if not sold out, at the door 30 minutes before the concert begins.

from Jason Elon Goodman
A Traveling Salt Stage Production.
Recorded on a pair of "Edwina" microphones hand made by Philip Graham of ear trumpet labs. eartrumpetlabs.com
Salt Stage Presents both local artists and those on a migratory path through the state of Maine in intimate portraiture: musicians, poets, performers, chefs, farmers, painters, sculptors and more. These performances are archived live without over-dubbing or post manipulation unless insisted upon by the artist in the performance. A high resolution recording system and one or two camera angles capture a cinematic feeling full of both visual and sonic tonality, paired with simple & clean editing . When not outside on location, windows are often left open to incorporate gulls, rainfall and other sonic signatures of Maine. Vintage lenses are also integral to enhance the filmic look of the vignettes. The Salt Stage began in Old Port, Portland but has now expanded to everywhere and anywhere, as archived in the Traveling Salt Stage section.... Watch the video here.

Posted by Jeff Boudreau at 6:12 PM