The Gang Who Could not Shoot Straight, Part Three....

WUMB, licensed to the University of Massachusetts, Boston, is "Boston's NPR music station."

The good people who run the Facebook fan page "Fans of Folk Radio WUMB" (subtitle: "we listen to WUMB so you don't have to") are reporting WUMB's music director gleefully admitting he only recently became aware of artists he has approved for the tightly controlled playlist.  OK, new artists come onto the scene every day, what's the big deal?  Mike (Merenda) and Ruthy (Ungar Merenda) were founding members of the highly successful folk rock band The Mammals, who themselves have visited the WUMB studio (see station photo below).  Furthermore, the current WUMB events calendar associates them with the Mammals.

This causes one to wonder, what value does a music director add when he is out of touch with the music scene?  WUMB has a very tightly controlled playlist.  Wouldn't the Boston-area music community be better off if WUMB management granted their "on-air personalities" the freedom to produce their own program content and to eliminate the music director position altogether?  That would also allow the station to return thousands of taxpayer dollars to the Commonwealth.

At 3:30pm this afternoon, WUMB's Music Director, John Laurenti, stated "That was "Covered" from Mike and Ruthy's debut album, "Million to One".  They just popped onto my radar about a month ago".

A month ago?  Where has he been hibernating for the past 10 years?

The Mammals have visited the WUMB studio! 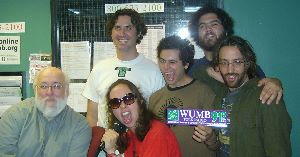 The Mammals visiting the WUMB studio.

Photo source - http://www.wumb.org/flyouts/recentvisitors.php?visitorid=150 - note the "folk radio" logo on the bumper sticker.  Now it's only a matter of time before this photo is scrubbed from the website, but not before the faux pas was uttered and the image captured.

Mr. Laurenti must know Mike and Ruthy are members of the Mammals, witness their current "on-air music calendar" listing - http://www.wumb.org/calendar/musiccalendar.php

Below, are listings for musicians, arts and cultural events in the greater Boston area, A link to each venue is included to confirm show times, for additional artists, or for more information.
You can find those and more listings here
You can also find out more about many of the coffeeshouses in the greater Boston area through the Boston Area Coffeehouse Association.
To submit your listings, use the "Calendar Submissions" link under the Calendar + Events menu above.
Listings for Mon Sep 27, 2010 - Mon Oct 11, 2010

Maybe the state should pay to send John to more conferences so he can become better acquainted with the musicians he plays.  Better, maybe the state should withhold funding the MD position and direct station management to free the program hosts to produce their own shows.

Mike and Ruthy's discography (not including the Mammals)

Million to One
2010
The amazing new CD featuring all originals with full band.

Waltz of the Chickadee
2009
Sparse arrangements and meaningful lyrics with lots of fiddle and banjo.

The Honeymoon Agenda
2008
Great covers and originals with emphasis on love and harmony.

Trapped in the Valley
2000
Mike's original batch of indie-folk-pop gems.

This is not the first time WUMB has dissed a notloB Mammal.  In 2008, when notloB presented Chris Merenda and Adam Sweeney at the Loring-Greenough House, WUMB placed the event listing on its secondary "community" calendar their standard policy for artists not approved for weekday airplay.
Posted by Jeff Boudreau at 12:50 AM