notloB Parlour Concerts and notloB Folk Concerts leads you down the crooked road this coming Friday and Saturday.  Who will show up is anyone's guess. 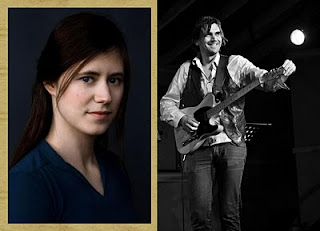 "Tashina is taking her music very seriously to the point where she will make a lasting impact on the people she touches with her talent in the future. She is in music for the right reasons and we as listeners will benefit from it". -Mark O'Connor

Tashina Clarridge has played Fiddle for 22 years - since the age of two. She has performed throughout the western United States, taught hundreds of lessons and works...hops, and won countless awards.

Raised in the mountains of northern California, Tashina studied with Megan Lynch and Rob Diggins. Her musical horizons were greatly expanded by frequent visits to Nashville for Mark O'Connor's fiddle camp where she studied with many fiddle heroes such as Darol Anger, Natalie MacMaster, Buddy Spicher, Matt Glaser, and Mark O'Connor. She is the current Grand National Fiddle Champion, a 6-time Grand National finalist, 6-time California State fiddle champion, and 2-time Western Open Grand Champion. Though her contest history clearly distinguishes her as a sparkling clean, studied player in the genre of Texas-style fiddling, it is her enthusiasm for many diverse styles of music that brings such a high level of creativity to her playing.

Tashina has performed at Carnegie Hall as part of Grammy winning bassist Edgar Meyer's young artists concert, and will be touring with Mark O'Connor this fall. She travels and performs throughout the western United States with her brother Tristan, the Bill Evans String Summit, and the contemporary bluegrass outfit, Due West. Together Tashina and Tristan have taught many lessons and workshops and have instructed at Mark O'Connor's Strings Conference for the past 5 years.

Jefferson Hamer started performing on music-club stages around Boulder, Colorado in the late 90′s, where he was immersed in the thriving bluegrass and jamband scene. He toured constantly on the national circuit, first with his original acoustic trio Single Malt Band, and later in the electric country-rock outfit Great American Taxi. After a decade spent living and working in the West, he moved to New York, seeking a broader audience for his original songs. As a newcomer to the big city, he found his way to the traditional Irish and Appalachian Old-Time sessions of lower Manhattan, where his ear, voice, and acoustic guitar playing earned him a seat alongside the fiddles, banjos, and pints of stout. His musicality reflects this breadth of influences, and his own songs echo the distilled melodies and lyricism of British, Irish, and American traditional music. In addition to his own full-band and solo shows, which are often flogged to life by unaccompanied electric guitar, he plays and sings with a decorated roster of performing artists including Anais Mitchell, Kristin Andreassen, Tao Seeger, Tashina Clarridge, and Laura Cortese. His 2004 release “Left Wing Sweetheart” earned a 4-star review from Marquee Music Magazine, who wrote it “sounds like a forgotten Gram Parsons release suddenly discovered.”

Suggested donation $12- at the door; $10 if reservation is made at least 24 hours in advance and Tuesday Club members. Addition of a $1/person “preservation fee” that goes to the LG House.

The Jamaica Plain series is in addition to larger concerts presented at the Unity Church of God in Davis Square, Somerville.

Additional information about this and other notloB concerts can be found at the http://sites.google.com/site/notlobmusic/ and/or by joining the mail list at http://groups.google.com/group/notlobmusic or by sending an email to notlobreservations@gmail.com

See other notloB Parlour Concerts at http://www.facebook.com/event.php?eid=136759883033069
then.....
TORNADO RIDER - presented by notloB Folk Concerts
at the Unity Church of God, 6 William Street (Davis Square), Somerville
Saturday, September 18
Doors 7:30
Concert 8:00
A tornado will be descending upon Davis Square on Saturday, September 18, will you be there to ride it?

http://www.tornadoriderband.com/
http://www.facebook.com/tornadorider
Tornado Rider is a magic band of otherworldly sneth-glee. Hardly a band, actually, more like an explosive imaginary experience above the clouds which you flew to on a mystical melody-carpet. Made up of equal parts raging pack of hyenas, effortlessly gliding haw...k, buffalo stampede, and over-excited puppy, Tornado Rider is an unforgettable experience that will dramatically increase your quotient of joy. Add to that the fact that all this colorful electric dynamite power comes from just 3 people playing cello bass drums and singing, and you have the makings of a champion. 3 champion sneth-animals rolled into one: a singular burrito of victory named Tornado Rider.

Featuring Rushad Eggleston, cellist/creator, who graduated from Berklee on full ride in 2003, and traveled the world with Darol Anger and Crooked Still. Tornado Rider is the ultimate expression of Rushad's rambunctiously melodic power-potential.

Witness Tornado Rider’s magically costumed theatrical parade of showmanship, musicality, athleticism, and humor, you will be transported to another dimension, and you WILL be entertained!!!

SUGGESTED DONATION: $12 at the door; $10 if reservation is made at least 24 hours in advance and to UCG members. 50 seats will be set aside for student rush @ $5.
notloB website
http://sites.google.com/site/notlobmusic/

Note: Due to the Loring-Greenough House's 250th anniversary, the parking lot will be closed to all except handicap parking.  There is a large public lot behind Blanchard's, just down Centre Street.

Posted by Jeff Boudreau at 8:36 PM