An open letter to the Boston Music Awards Academy. Where's the folk?

1.  Misunderstanding of the term "folk" music, confusing it with the contemporary pop acoustic music.
2.  The absence of traditional folk, bluegrass, old-time and Celtic categories.

May I suggest the academy reconsider the 2011 categories:

1.  Rename "folk" as "traditional or revival folk", and restricting nominations of contemporary singer-songwriters unless they are writing in that traditional manner.
2.  Adding categories for old-time, bluegrass and Celtic.

Jeff Boudreau
Producer, notloB Folk Concerts
Host/Producer, "In the Tradition" on Community Radio WCUW, Worcester
Host/Producer, "Blackstone Valley Folk, the Grafton Sessions", Grafton Community Television
Moderator, NEFolknRoots
The following is a post made to NEFolknRoots, a 550-member news and discussion group that you and all are welcome to join (it's free, just register), with copies sent to the Boston Bluegrass Union'sFolk Song Society of Greater Boston and officers of the Canadian-American Club of Boston.  I hope it inspires their members to become more actively involved in the 2011 nomination process.

========= The BMA's work is worthy, promoting the local live music scene and channeling monies raised at the awards ceremonies to music charities.  But with a focus on commercial and popular music, the BMA academy overlooks the vibrant traditional folk, old-time, Celtic, and bluegrass scenes.  View the nominees.

And as far as the "folk" category, the 2010 nominees could be better described as contemporary singer-songwriters.  Compound this with the fact that several are duplicated in the singer-songwriter category.  Remember the words of Geoff Muldaur, "just because someone is standing on the stage with an acoustic guitar does not make him or her a folk artist." 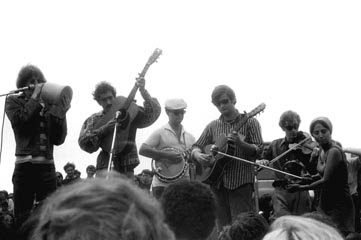 Jim Kweskin and the Jug Band, photo credit Jim Corwin
Why are there no traditional folk, old-time, Celtic and bluegrass music categories and why is BMA perpetuating the public's confusion of singer-songwriter music as folk music?  It's too late for 2010, but if you are also perplexed, read the 2010 nomination process and suggest to the "Academy" that "folk" be redefined as "traditional folk", and add old-time, Celtic, and bluegrass categories.