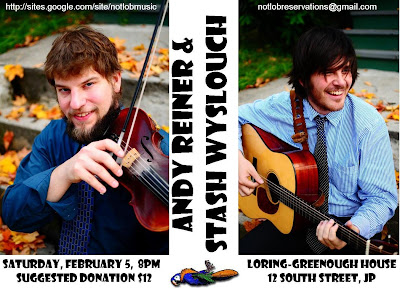 Snow schmow!  We're hearty New Englanders!  Just allow a bit extra travel time / take the T.  Destination is 12 South Street, Jamaica Plain, 02130.
If you drive - parking at the Loring-Greenough House is limited.  There is a large public parking lot <2 blocks away behind Blanchard's, 741 Centre Street.
By MBTA - buses connect at the Orange Line's Forest Hills station and run up South Street, get off  at the monument; direct service from Copley Plaza.  Plan your trip via http://www.mbta.com

Andy and Stash have performed at two notloB concerts with their band Blue Moose and the Unbuttoned Zippers (May 23, 2009, as part of the Falcon Ridge Folk Festival "Most Wanted" tour, and January 23, 2010).  When, at the Mariel Vandersteel and Julie Metcalf concert last Fall Andy approached us with the proposition he and Stash perform, we immediately said YES!
notloB Folk Concerts is pleased to welcome back two alumni, Stash Wyslouch & Andy Reiner, on  Saturday, February 5 (doors 7:30, concert 8:00) at the historic Loring-Greenough House, 12 South Street, Jamaica Plain.
Andy Reiner, an award-winning fiddler and violinist from Lexington, MA, grew up in a musical family. He began playing at age 5, learning fiddle from his father Dave Reiner, a fiddle contest champion and author of instructional fiddle books with publisher Mel Bay. Andy took 13 years of classical violin lessons from Helene Kamen in Lexington, MA. Attending Mark O’Connor’s Fiddle Camp in Tennessee in ’97 and ’98 changed Andy’s life forever. Over many summers of fiddle camps, he studied Old Time, Bluegrass, Irish, Swing, New England, and other fiddle styles and repertoire, and internalized the spectrum of different teaching methods of the many world-class fiddlers and educators from whom he took workshops.
Upon graduating from the prestigious Berklee College of Music in Boston in 2008 with a BM in Violin Performance, he continued touring with several bands while taking on private students. Andy’s fiddle playing as been prolifically represented through his life, playing with the Reiner Family Band from an early age, Heavy Metal with Devil in the Kitchen, Folk/Hip- Hop with FiddleFoxx, and currently with the Earth Stringband and Blue Moose and the Unbuttoned Zippers. He has been playing with Stash Wyslouch, guitarist, for 9 years, and together, they have formed an inseparable bond that is road-tested and constantly evolving.
He teaches workshops at the Meadowlark Music Camp in Maine, Fiddle Hell in Groton, MA (where he has worked with his father to develop the educational concepts that combine learning and fun), Bancroft Strings Camp, Worcester, MA, and has also taught workshops at the Creative Strings Workshop, Columbus, OH and through the Mountain West while on tour in Salt Lake City, UT and Pocatello, ID. As well as being a member of the American String Teachers Association, Andy was one of the first teachers to be trained in teaching the new O’Connor Violin Method, created by world-famous virtuoso fiddler and violinist Mark O’Connor – putting Andy at the cutting edge of beginning violin educational techniques.
Andy has composed five major works for string orchestra, which have been performed at the Berklee Performance Center and the Kennedy Center. His experience arranging for bands and groups helps in teaching novice players, creating an ensemble sound that they really enjoy. Last year, Andy published a book of 54 original compositions for fiddle / violin; this typifies his approach to teaching the instrument in a customized and creative way. With the Reiner Family Band, he just released a 2-disc set containing 52 fiddle tunes played fast and slow. Finally, Andy is currently working on a new Mel Bay instruction book and DVD with his father on fiddle bowing patterns, chops, and other techniques.


Stash is a touring musician originally from Lexington, MA but now residing in Brighton, MA and deep in the music scene of Boston. You can find Stash touring nationally and internationally as a vocalist, guitarist and songwriter in bands such as "Blue Moose and the Unbuttoned Zippers" whose debut album 'Rousted' is being released in September featuring many of Stash's original compositions, or in the band "The Boston Boys" whose made appearances at festivals such as Grey Fox Bluegrass Festival and recently the New Bedford Summerfest. Stash also tours nationally and internationally with the band "The Deadly Gentlemen" fronted by Greg Liszt, banjo player of the band 'Crooked Still' and former banjo player of Bruce Springsteen in 2006, whose album "Carry Me To Home" is in the process of being released after spending a grueling summer recording in studios across all of the United States.
A recent Berklee graduate, Stash has studied and played with some of the best musicians in different respective genres ranging from Bluegrass to folk music to rock to jazz, taking the guitar from its limited genre possibilities to another world of individuality and creativity. Stash is fascinated by the mechanics and beauty of music and is ready and willing to expose these fundamental building blocks to a creative and fulfilled musical life. His passion flows through his writing, performing, and teaching affecting those all around him. His lively performances and enthused lessons always leave the other party wanting more and ready to tap into a deeper sense of self through music.

Posted by Jeff Boudreau at 2:54 PM