Yogurt has a live culture.

Excerpt: "On the Fans of Folk Radio WUMB wall, member Carol Lashnits poses the observation and question: "It's wonderful that WUMB is honoring Dick Pleasants. I just wish that the money raised went to him and not to Pat's $7 million capital campaign. Doesn't that seem a bit unethical?"

Low Down in Beantown is the latest entry in the continuing national saga of the milquetoastification of "public" radio and the acts of the corporate management thinking behind it.

Low Down in Beantown 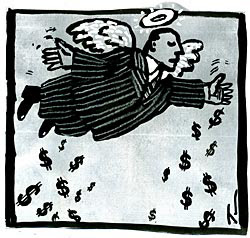 The oblivious liberal might fall prey to being hornswoggled by the appeal posted here yesterday — that is, the plea to man the barricades and fend off the Republican hordes seeking to defund public media. After all, the website beseeched viewers, the raison d’être for said media is a focus on “quality local programs” and “a particular focus on the needs of underserved audiences.” When the laughter in Austin and Boston died down, it became clear that those underserved audiences no doubt referred to lovers of Triple A music — the Bob and Jack of FM radio.

A recent gaucherie noted on the Facebook site of the Fans of Folk Radio WUMB, here, and passed on by Jeff Boudreau, serves to illustrate the savoir faire of the bean counters who’ve become the arbiters of “public” these days. The Facebook note — entitled “Doesn’t that seem a bit unethical?” — reads as follows:


On the Fans of Folk Radio WUMB wall, member Carol Lashnits poses the observation and question: “It’s wonderful that WUMB is honoring Dick Pleasants. I just wish that the money raised went to him and not to Pat’s $7 million capital campaign. Doesn’t that seem a bit unethical?

Dick has been a mainstay in Boston folk radio for 40 years, of late relegated to a two-hour shift on Saturdays on WUMB. The note quotes the WUMB website:


Over the years, he has staunchly supported dozens (maybe even hundreds) of musicians and has encouraged the launch of dozens of folk music venues. Boston has a reputation as a great music city. Dick Pleasants is one of those individuals who helped create that image.
For 40 years Dick has shared the music he loves with us. Many of his friends think it’s time for us to return that love. On Friday, January 7, 2011 at 7:00pm at Sanders Theater, several musicians and many of his friends will pay tribute to Dick in a one-of-a-kind, and once-in-a-lifetime celebration of a “really special guy” and “one of the most down-to-earth people you’ll ever meet.”

Can you feel the love? Well, if you’re in the Boston area, you could have partaken of this lovefest for just $50 a pop, $100 if you felt you’re of the real special VIP sort and wanted to be seated up front and meet and greet Dick.
But wait. There’s more. And it is special:


You can use Facebook, Twitter, E-mail, or you can print out copies of this PDF of our 11″ x 17″ special full-color Hi-Resolution poster about the event and distribute it in your neighborhood.

Wa-a-a-y down at the bottom is the one footnote: “Proceeds will benefit WUMB’s Capital Campaign, by naming a room after Dick Pleasants in the new WUMB Studios & Offices.” You just know it’ll be a very special room, too.
And the author, in a nice turn of phrase, summed it up aptly:


WUMB is not the only Boston-area radio station where Dick has spent his 40+ year career (others include WCAS and WGBH, but supported by that last sentence, it appears to be the only one willing to turn him into a marketable commodity. So, yes to Carol, we agree with your statement, but are not in the least surprised.

Not surprised in Austin, either. After blithely hacking the hours of three free-form deejays and cutting their benefits, KUT suits brazenly dubbed them “Legends” and shamelessly hawked their names in the following fundraiser. This is de rigueur in public radio management nowadays. Perhaps one or two of the 24,000 passers-by stopping in here may have missed our oft-repeated witticism: the difference between these management types and yogurt? Yogurt has a live culture.