...bigger and better than ever!

Patrons following the music series' history know that the JP Tuesday Club decided to not renew the contract to present music at the historic Loring-Greenough House, which lead to a search for a new venue and shuffling of the Fall schedule.

Rather than presenting solo acts in the intimate confines (40 seats) of the Loring-Greenough House's parlor, Notlob's Fall productions will be much larger (200 seats) Clarendon Hill Prebsbyterian Church,155 Powder House Blvd, Somerville, artists will be presented in pairs.

The sanctuary has wonderful acoustics. What may be lost in intimacy will be gained in performer dynamics. It will be an interesting and wonderful experiment.

The first concert in this new format will be....

Posted by Jeff Boudreau at 5:44 PM No comments: Links to this post 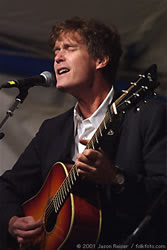 Dave Carter rose to folk fame with his musical partner Tracy Grammer, winning the prestigious Kerrville New Folk Song Contest, and becoming favorites on local stations and with folk audiences across the country.

In 2002, Dave Carter died suddenly, shocking the folk community. A tribute concert of songs replaced the set he and Tracy were to share at Falcon Ridge the week following his death. Chris Thompson Lively and her sister Meredith performed their version of "Tanglewood Tree" on the Falcon Ridge stage. Dave Carter’s songs have been recorded by artists such as Joan Baez, Ronny Cox, Chris Smither and Lucy Kaplansky.

Tracy Grammer continues to perform Carter's work, and encourages others to do the same. In 2007, several local performers came together to offer a tribute concert close to Carter's August 13 birthday. The result was a collaborative celebration of the power of performance and song.

This second annual Dave Carter tribute promises to offer attendees a glimpse into the beauty of Carter's work, and the influence it has had on the next generation of songwriters.

Participating in the show:

Chris Thompson Lively is a guitarist and lead vocalist for the Strangelings and the duo Chris and Meredith Thompson, offering powerful clear vocals and percussive, riff driven guitar work. She has performed on the main stage at Clearwater Hudson Revival, Falcon Ridge Folk Festival, and the Boston Folk Festival. The Thompsons have recorded Dave Carter’s “The Mountain”, and “Tanglewood Tree” and Meredith named her first son Carter in Dave’s honor. The Thompsons have been finalists in the Falcon Ridge New Folk Contest, the South Florida Folk Festival Songwriting Contest, and won honorable mention in the USA Songwriting contest. (www.cmthompson.com/info.html the Strangelings http://www.kennedysmusic.com/thestrangelingsbio.html)

Ryan Fitzsimmons is known for high-octane performance, songwriting that ranges from the subtleties of a moment to the aggression of a bar-fight, and impressive guitar work that exudes feeling. He's been engaging audiences at venues all over the north-east and beyond. In 2007 he won Best Local Male Vocalist in the Providence Phoenix Best Music Poll, showcased at the Falcon Ridge Folk Festival, and in 2008 opened the Newport Folk Festival on Sunday, August 3rd. (www.ryanfitzsimmons.com/press.htm)

Beth DeSombre released her debut CD, Crooked Highways, in December 2007. Her songs have won honorable mentions in national and international songwriting contests. Beth is based in the Boston area but has begun to tour nationally, and has recently made guest appearances at major folk festivals. (www.bethdesombre.com/bio.html)

Eric Lee went from the Falcon Ridge hillside to the main stage with the Strangelings 2007 performance, and quickly became a festival favorite. He was trained in classical violin from the age ten. He began studying Celtic music and improvisational jazz, and soon after began working as a session player in various recording studios in upstate New York. He teaches, records and plays with the Strangelings, The Thungs, and their side project, The Others. (www.myspace.com./celticrocker)

Dave Carter rose to folk fame with his musical partner Tracy Grammer, winning the prestigious Kerrville New Folk Song Contest, and becoming favorites on local stations and with folk audiences across the country.

A portion of the proceeds will be donated in Dave's memory to the Falcon Ridge 2008 Tornado Fund.

Posted by Jeff Boudreau at 10:22 PM No comments: Links to this post