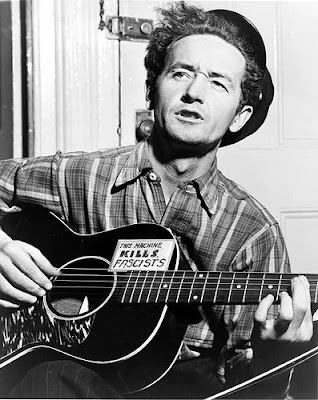 ...at one of these fine events!

Click here visit the Woody Guthrie Store and get 15% off your items!

July 14, 2009 will be Woody's 97th birthday. We hope you can make it to some of these wonderful events celebrating his life & legacy!

It's Been Good To Know Yuh: Woody Guthrie in Pampa, 1929-1936 EXHIBIT
Curated by Woody Guthrie Archives Curator, Jorge Arevalo, this exhibit will illustrate how the years Woody Guthrie spent in Pampa, Texas, from age 17 formed the foundation of a life that was to influence the folk music genre for the generations to come. Family tragedy, the Depression and Dust Bowl years, and picking up a guitar and giving a voice to the plight of the American worker were the driving forces that guided Woody throughout his prolific, but too-short career.
Panhandle Plains Historical Museum
2503 4th Avenue
Canyon, TX 79015
T: (806) 651-2244
W: panhandleplains.org

Friday, July 10th at 10:00a: Secrets of the Archives
presented by Tiffany Colannino
(Crystal Theater)

Saturday, July 10th at 10:00a: Bound For Glory: The Legacy of Woody Guthrie
presented by Anna Canoni
(Crystal Theater)

6th Annual Woody Guthrie Birthday Hootenanny
Mt. Zion Church at Reis Park
Located on the East side of Rt. 139 about halfway between Rt. 100 and Rt. 202 in Somers NY. The church is on the right as you enter the park.
Somers, NY
For more information, contact Scott Urgola
E: info@scotturgola.com

Posted by Jeff Boudreau at 7:54 PM No comments: Links to this post

With a career spanning more than half a century, renowned folk artist, political activist, and avid environmentalist, Pete Seeger, turned 90 in May of 2009.

In honor of the milestone birthday, a multi-generational roster of artists, whose music has been shaped by Seeger’s vision, gathered at Madison Square Garden on May 3 to celebrate his lifetime achievement. Pete Seeger’s 90th Birthday Celebration from Madison Square Garden will premiere in HD on THIRTEEN’s Great Performances on Thursday, July 30 at 8 p.m. EST (check local listings).

Great Performances is a production of THIRTEEN in association with WNET.ORG - one of America’s most prolific and respected public media providers.

Joining Seeger for this extraordinary concert event were more than 40 artists, including Bruce Springsteen, John Mellencamp, Arlo Guthrie, Joan Baez, Kris Kristofferson, Richie Havens, Roger McGuinn, Ani DiFranco, Taj Mahal, Ben Harper, Dave Matthews, and many others who performed songs inspired by Seeger’s music and activism. Concert highlights include Seeger leading the audience in a rousing sing-along of “Amazing Grace.“ Other classic favorites compelling the enthusiastic audience to join in were “We Shall Overcome“ and “This Land Is Your Land.“

Born to a large family of musicians, young Peter first learned to play the ukulele, graduating to the five-string banjo in the mid-1930s, ultimately mastering the instrument and, in the process, galvanizing the American folk music movement. A pioneer of protest music, Seeger’s anti-Vietnam War songs, including the now famous “Where Have All the Flowers Gone?“ and “Turn, Turn, Turn,“ as well his interpretation of the Civil Rights anthem, “We Shall Overcome,“ garnered mainstream attention in the 1960’s, revitalizing the genre and paving the way for countless other activist musicians-including Bob Dylan-to achieve widespread acclaim.

The concert was a benefit for the Hudson River Sloop Clearwater, a non-profit, environmental organization created by Seeger to bring awareness to the importance of protecting the Hudson River and our other natural resources.

In February 2008, THIRTEEN co-produced and broadcast the first and only authorized biography of Seeger, American Masters: Pete Seeger: The Power of Song. The film was awarded a Primetime Emmy.

Visit Great Performances Online at www.pbs.org/gperf for additional information about this and other programs.

Posted by Jeff Boudreau at 3:25 PM No comments: Links to this post 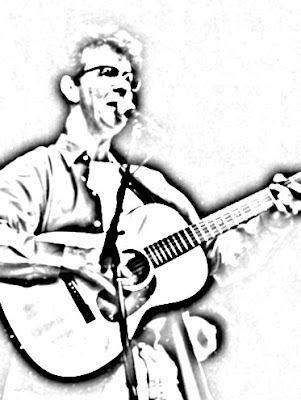 ...Former rhythm, fingerstyle and lap steel guitarist / vocalist with and co-founder of The Waybacks and solo performer. Co-conspirators over the years have included Roy Zimmerman, The Foremen, Bob Frassetto and The Back Room Boys, Rory McNamara and The Frontmen, Marla Fibish & Jamie Bell and The Heart Of The Roll and Doug Adamz. Regular contributor to Acoustic Guitar Magazine. Stevie gives guitar lessons both at home in the the San Francisco Bay Area and while on the road.

More information at http://notlobmusic.googlepages.com
Posted by Jeff Boudreau at 12:17 PM No comments: Links to this post

Down by the River 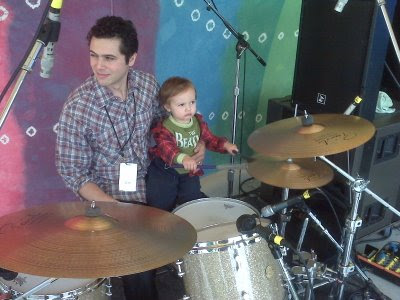 I'm back from 7 days doing sailing/environment education with the Clearwater Foundation and 3 days at the Hudson River Revival (a.k.a. Clearwater) Festival.

Every day aboard the Mystic Whaler with Captain John, First Mate Pat and crew doing sail/art/history/water testing/biology/navigation training and at the festival were unique and wonderful but the absolute highlight was coincidentally being moored in Beacon the evening the city honored Pete and Toshi. As a part of the ceremony Pete sang three songs. I of course joined in, which is nothing out of the ordinary at a Pete concert, but because it was in the city council chambers I guess others were not so inclined. Afterwards in the lobby, about to meet him in person I was apprehensive what to say, instead he approached me, hand outstretched, and with a twinkle in his eyes said "thank you for singing, you were the leaven that made the bread rise...." (which he also uses in the introduction to "Rise Up Singing") but nonetheless I was floored!

Read the proclamation at the end of this post.

The festival itself is one of the greenest I have attended. Some observations you may wish to share with other festival organizers:

The Clearwater Festival was very easy to get to by public transportation. One can take one of several buses from Boston to NYC (I took Fung Wah , an experience in itself), then the subway to Grand Central to the Metro North Railroad. The festival provided a free shuttle service between the Croton train station and the grounds.

Mark your calendars to attend the next Hudson River Revival Festival, but you can get involved with the Clearwater organization now.

Whereas the following statements in this proclamation are known to be true:

Pete Seeger has international distinction as an American folk music singer and songwriter, was awarded the National Medal of the Arts and the Kennedy Center Honors in 1994, was inducted into the Rock and Roll Hall of Fame in 1996, won his first Grammy Award for Best Traditional Folk Album in 1997, won the prestigious 2009 Freemuse Award, won his second Grammy for Best Traditional Folk Album in 2009, and has been honored by the forty fourth President of the United States, Barack Obama.

Pete Seeger has inspired the universal values of peace, justice and freedom for millions of people throughout the world, in the songs he has written “If I Had a Hammer”, “Where Have All the Flowers Gone” and “Turn, Turn, Turn”. Pete has generously passed on his appreciation of music and the environment to Beacon school children though classroom and auditorium sing-a-longs.

In 1968 Pete founded the sloop Clearwater which has reached international recognition for brining attention to the environmental cleanup of the Hudson River and has been an inspiration for the environmental movement all over the globe. On this historic day, an agreement will be ratified for the Beacon Harbor to be the home port of the Sloop Clearwater and for the White House of the University Settlement Camp to be the permanent Headquarters of the Clearwater organization. It is because of Pete and Toshi’s fondness for the University Settlement Camp that this location was selected.

Posted by Jeff Boudreau at 9:30 AM No comments: Links to this post

Summer concerts are presented at the historic

Tim Mason & Tom Begich
The suggested minimum donation for the Newton "kitchen" concerts is
$10 at the door or $7.50 with reservation (made at least 24 hours in advance).
$50 family maximum.
To make a reservation or for more information, send an email to
notlobsreservations (at) comcast.net
Notlob Concerts are 100% volunteer run and not for profit.
After production expenses, all donations go to the artists.
Posted by Jeff Boudreau at 9:07 PM No comments: Links to this post 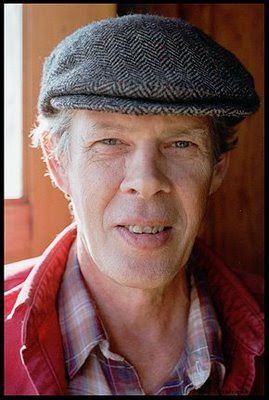 
Suggested minimum donation is $15 or $12.50 if a reservation emailed to notlobreservations (at) concast.net is made at least 24 hours prior to the concert.

About the series.
notloB Concerts are volunteer run and not for profit. Whether presented at historic and intimate museum houses like the Loring-Greenough House in Jamaica Plain or the Jackson Homestead in Newton, or at one of several church venues, or at private residences, all are run as house concerts where, after expenses, 100% of the patrons' donations go to the artists. More information about the concert series can be found at the notloB website,
http://notlobmusic.googlepages.com

Dinner and a show!
Phone ahead for reservations ~ 781-648-8882, present your printed reservation confirmation and get 10% off your dinner check at House of Tibet Kitchen, 235 Holland Street, Somerville, Ma 02144. Reservations recommended - 617-629-7567. And desert! Members of the Unity Church of God Church will be providing pastries, teas and coffee, so save room for desert.

To make a reservation or get more information, send an email to notlobreservations (at) comcast.net